December 28, 1900, 8 pmChipley, Florida I have to get out of here. This is not my home. I don’t think it really ever was…. I walked through the vestibule, to the hallway, and opened the kitchen door. In the kitchen, Esther glanced up at me and smiled, as she replaced […]

Chapter 46: What We Call Fortuitous 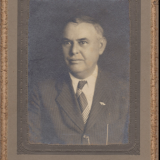 December 28, 1900, 7:30 pm Chipley, Florida “About done in there, Emmett?” Blake stuck his head around the door of the depot’s back office, where I sat at the telegraph, finishing the report for today’s telegraph messages. The key had been silent for the past 15 minutes or so, a […]

Chapter 44: To Be Someone Else

December 25, 1900, 6:35 pm,P&A Train Depot, Chipley, Florida The Chipley train depot is a long, gray-and-brown, rectangular wooden building that looks very much like the other Pensacola & Atlantic stations along the line. There’s nothing remarkable about it other than the fact it has been rebuilt a few times; it […]

Christmas Day, 1900 The Wilson Home,Chipley, Florida Have you ever seen pictures of seated royalty on their thrones? The ones featuring a king, with princes and other members of the royal family seated around a central authority figure in descending order of power? If you stood Father’s front yard that […]

Chapter 38: No One Will Ever Know This

December 22, 1900The F.C. Wilson House, 6th Street, Chipley When I reached the house, I was out of breath. The air was sharp and cold; I could see my breath as I exhaled. I stopped on the top porch step, and took in a few slow, deep breaths. I turned […] 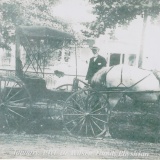 December 22, 1900Dr. Francis C. Wilson’s Office, Downtown Chipley Continued from here. === I climbed the stairs and paused at the top; my heart was pounding.  I closed my eyes, and counted to ten; rubbed the center of my chest. Touched the liquor flask hidden in my coat pocket. After […]

Chapter 30: When Times Get Tough

December 22, 1900The L&N Train DepotChipley The #22 L&N train pulled into the Chipley station a few minutes before 1 pm; it was a mild day for late December, about 55 degrees, an overcast, milky white sky. Chipley is a nice town, but it has never really felt like home […]