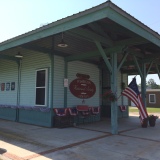 Friday, May 24, 2014, about 11 a.m.Chipley As the officer said, the old train depot in downtown Chipley wasn’t hard to find. Fifteen minutes later, I’m sitting my car, in front of a seafoam-green building that definitely looked like a train station from the early 19th century. I note that […]

Folks, I’m spending a few days decompressing from the road trip to Pensacola. I have to take a few days off from research and writing about our guy because, frankly, I’m beat. It was a great trip, and I enjoyed it, but it was intense and compressed. I can’t get […]

A Lesson in History

This weekend, I’m working on a small part of the second chapter of Emmett’s story, taking place in December, 1899. Emmett is coming home from college (West Florida Seminary) for Christmas. I want to describe what the town looked like when he hopped off the L&N train at the Chipley […]

Update on the research: The re-collection of lost images week has begun. I’ve reordered the film to rescan those images, and I’m almost finished going over my entire database. It has been a painstaking, image-by-image process. I’m double-checking every fact I have on Emmett that I intend to use in […]

Readers, I had been planning another trip to Pensacola to get information on Emmett’s career as an attorney, District Attorney, and State Attorney during 1906-09. However, that second trip may be delayed. I found this today: Uh oh. I’ve kvetched about hitting roadblocks before, but this barrier is a significant […]

One of the best parts about Emmett’s research trip was a visit to Chipley, Florida. This is where Emmett lived from about 1884 to 1900. The US Census (dated April, 1900) reveals Emmett was enumerated in his father’s household, but that summer, Emmett moved to Marianna, where he studied law […]