One of the best parts about Emmett’s research trip was a visit to Chipley, Florida. This is where Emmett lived from about 1884 to 1900.

The US Census (dated April, 1900) reveals Emmett was enumerated in his father’s household, but that summer, Emmett moved to Marianna, where he studied law under the tutelage of older brother Cephas, before attending law school at Stetson University in 1902. After that, Emmett would refer to Marianna as his ‘hometown,’ but the reality is that he ‘grew up’ in Chipley.

I spent a day with the staff of the Washington County Historical Society (WCHS), who were very helpful pointing out buildings Emmett would have seen and visited. 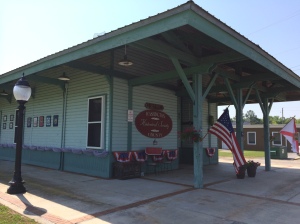 The WCHS is a replica of a depot of Emmett’s day, about 150 feet away from the original site!

(In fact, Emmett would have disembarked from the train right at this location, then walked the four or five blocks to his father’s house on Sixth Street, which still stands, by the way. I’ll have a separate entry on the Wilson home in a few days.)

I met the curator, Dorothy Odom, and two local historians, retired Judge Perry Wells, and Mr. Whit Gainey. Everyone was gracious and generous with their time;  they spent several hours with me talking about life in Chipley in the early 1900s, and provided excellent (and locally written) references to examine while I was in their archive.

At one point, I took a break to explore downtown Chipley so as to get an idea of what Emmett might have seen. I was not disappointed.

There are several  buildings in existence — but just barely — that date from Emmett’s time. I say ‘just barely’ because these are beautiful historic structures in desperate need of repair.

One such building from Emmett’s time, The Dunn Building, 1916. The historic First National Bank building, far right, is in desperate need of repair.

Here’s a photo of the First National Bank, organized in 1905, under construction: 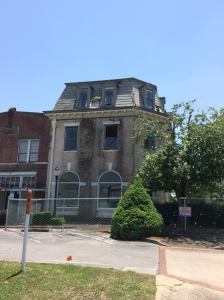 The structure has lovely bones on the inside. You have to see it in person to appreciate it.

It wasn’t hard to sense that Emmett had walked along these same sidewalks to get a haircut and shave; to visit the pharmacy; to get a cup of coffee. The heart and the soul of downtown Chipley feels very unchanged from those long-ago days, despite the presence of people talking into cell phones here and there, and other modern developments.

Along the sidewalks in Chipley. 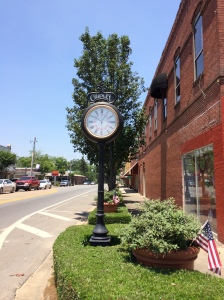 Beautiful building; I wonder what it was in Emmett’s day?

The railroad runs right down the center of downtown Chipley.

The railroad tracks run right down the center of downtown Chipley, just as they did back in Emmett’s day. The main difference: No passenger train service, only freight trains today.

One of my goals was to visit Emmett’s parents at Glenwood Cemetery. Whit found an internment guide, and took me out to the cemetery, where we located the Wilsons — and, I kid you not — a surprise.

Readers, one of the biggest information holes I have in telling Emmett’s story is that I know very little about his mother, and unfortunately, there is almost nothing written her in the genealogies.

However, when I visited her grave, at the bottom of her marker, was this:

Elizabeth Wilson. She must have, truly, been someone you’d want to know; I think Emmett was very close to her.

Even though digging around for information on Elizabeth is proving a big challenge, I’m far from giving up at this point. 🙂

I was only able to budget one day of the research trip for Chipley, but I plan to come back to do follow-up later this year, and spend more time with my new friends and colleagues. Everyone I met welcomed me without reservation, and expressed interest in helping with Emmett’s biography.

Before the trip, I made sure to study as many years of the Chipley newspapers as possible, in great detail, to learn as much as I could about the Wilson’s contemporaries. I paid attention to the descriptions of how people interacted with each other, the courtesies they paid each other, the empathy shown for those experiencing loss, the entertaining stories and jokes they told to each other. The newspapers, of course, cannot give you an absolute, perfect idea of what it was like back in Emmett’s day, but you get an idea of the community in general.

I think Emmett would have liked this, too.