I came across this today. I wonder if this Frank Wilson is related to my Emmett Wilson. 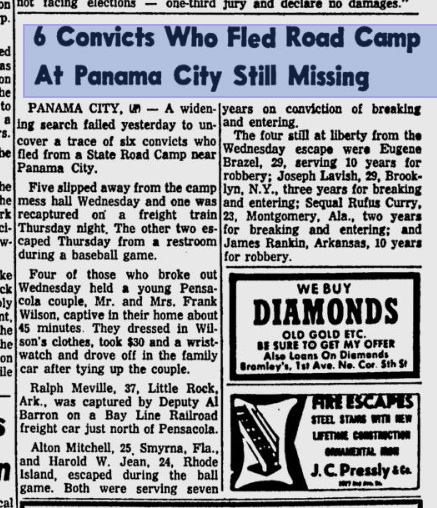 Frank Jr. and his wife, May, only had a daughter, who died in infancy. They lived in Pensacola for awhile, but later removed to Marianna.

Another brother, Meade (also known as Everard Meade Wilson), died in 1914. Meade had two sons, Everard Meade and Francis, (named for Emmett and Meade’s father and older brother. Popular name in that family.) Meade and his wife, Carrie, are buried in Pensacola.

I’m pretty sure this is Meade’s son, Everard Meade Wilson, Jr. The grave is in Sumter County, Florida. Source: findagrave.com

I’d guess that the Frank Wilson in this article is possibly grandson of Meade’s. Here’s the thing: I also know that several of Emmett’s siblings named their sons in honor of Dr. Francis C. Wilson. Again, I’d guess the young man in the article is a nephew or grand nephew of Emmett’s, but whose?

I’ve had no luck finding or contacting any of Meade’s descendants, and I’d love to hear from them, ask them questions about Meade and Emmett’s relationship (if they know anything), and share what I know from my research.