Of the photos I have of Emmett, I don’t have one of him officially smiling. That’s something I’d love to find. Here’s what I do have:

Emmett in a fancy bow tie, courtesy of his mother, Elizabeth Wilson, taken in 1890.

His first official photo as a U.S. Congressman, taken in 1913:

His second official photo, taken in 1915:

I also have a photo of Emmett seated with the Banking & Currency Committee, 1913; a contentious lot of fellows. There were rumors of fistfights among the members during hearings. I have been looking for the minutes of the hearings at the National Archive.

Emmett is first row, third from the left. Hard to tell if he is smiling, perhaps he is gritting his teeth; this was a contentious group.
Source: The Daily News, Denver, Colorado, September, 1913

I’m sure Emmett wasn’t so somber all the time. There must be a photo out there of him smiling, somewhere. For all that he had a serious career, I know he had a sense of humor. I have found articles where he told jokes to reporters, and that he used to play pranks on people when he was a teenager.

However, I have this from a reporter about his general, everyday expression:

It’s a joke, but as we know, there can be a lot of truth in humor. Source: The Daily Northwestern, Oshkosh, Wisconsin, 1912.

Emmett’s smile. Maybe it was a rarity.

Until I have an actual photograph of Emmett smiling, I think I have an idea of what his smile probably looked like.

This next photo is of Emmett’s sister, Katie, and her husband, Emmett Augustus Meade. The young man on the other side of Katie is her son, Everard Meade, freshly minted graduate of the University of Virginia, about 1930. 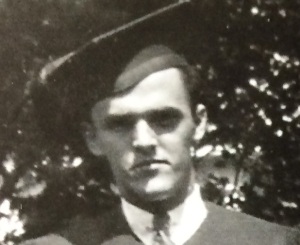 A close-up of Everard Meade. 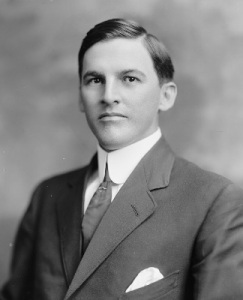 They should look a lot alike; not only was Everard Emmett’s nephew, but he was also Emmett’s second cousin — Emmett’s sister Katie and Emmett Meade were first cousins. Their mothers were Elizabeth Maxwell Wilson and Lucy Maxwell Meade. Sisters. All in the family, you know.

So, I offer for your consideration, this: 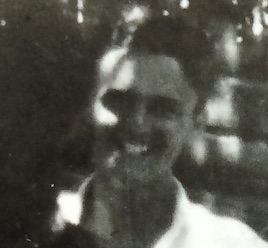 Based on the very close DNA between Emmett and his nephew/second cousin, I posit that Emmett’s grin looked a lot like this.