Emmett’s story is still moving forward; as reported a few weeks ago, I’m nearing the end of the first installation of the book, which covers 1899-1906.

At present, I’m deep in the last half of 1905, around Labor Day. It wasn’t a big, last-summer-hurrah vacation for Emmett, because in 1905, Emmett spent the holiday in Marianna.

He’d might have wanted to go to Pensacola, but it was unlikely he went this year:

In previous years, he’d likely have gone to Pensacola to stay with the Kehoes or his uncle Evelyn Maxwell’s family, but this year there was a serious yellow fever outbreak. Source: The Pensacola Journal, page 1, Sept 5, 1905.

Besides, by Labor Day, Emmett already had his big vacation.

Every year in August, Emmett spent his summer vacation with friends and family in St. Andrews. After he was more established in his career, he would block out the first two or three weeks in August specifically for St. Andrews, where he would spend it with either Cephas’ family (they rented a cottage for a month), or with the Kehoes (who also took a cottage for the same duration). If there wasn’t enough room for him at one point or another, he’d take a room at the Gulf View Inn for a few days or a week. 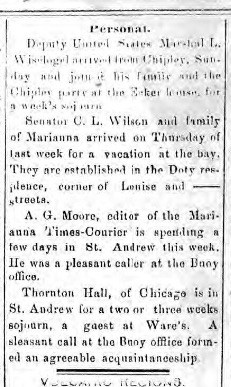 St. Andrew’s Buoy, August 21, 1902 — Cephas and family renting a cottage. This was routine for Cephas and other Wilson family members.

Emmett would make sure to let the newspapers know when he was headed off on vacation every year. Thanks, Emmett! Source: The Pensacola Journal, August 5, 1908

One thing that stands out in studying Emmett’s vacations is that he was very much a creature of habit.

Every year, without fail, it was St. Andrews, where he would spend most of the time fishing with his brothers. He would not (and did not) simply take off for somewhere new, just to go exploring — routine was comfortable. Besides, he was a mostly solitary, reflective type of person — hours of fishing suited him very well. He could retreat from whatever pressures and stressors in solitude, sitting on a quiet sandbar, waiting, thinking, yet still being productive in catching his dinner.