I like to check on my favorite databases every six or eight weeks, so as not to miss any updates. And — SCORE! — the excellent Chronicling America newspaper database (of the Library of Congress) had added several years of The Pensacola Journal since my last visit!

And what an interesting find!

Check out the “Letter to Santa Claus,” almost in the center of the paper. It was written 101 years ago today!

A breakup in progress! Or was it? Lots of little digs at Emmett in here, too.

The editors who wrote this snippy little piece had had it with Emmett by this point. If you recall from an earlier post, Emmett damn near died almost exactly one year ago — he was found unconscious in his room at the Congress Hall Hotel, where he lived right across the street from his office in the House Office Building (today known as Cannon House Office Building).

This was the nadir of Editor Frank Mayes‘ patience with Emmett — whom he had brought out of obscurity to national prominence as  a U.S. Congressman. All Emmett had to do was follow Mayes’ bidding in Washington, D.C.; follow the party’s directives without question, and Emmett would likely be given a nice, cushy job on the Florida State Supreme Court (which Mayes & Co. KNEW was Emmett’s lifelong goal). 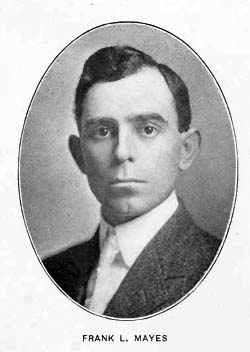 What Mayes & Co. didn’t realize was that despite Emmett’s terrible addiction, he had a good heart, and integrity. Emmett was also a people-pleaser of sorts: The  outcry and negative publicity that good old Frank Mayes put out in his own paper, about his personally selected man to represent the party’s ideas in Washington, got to Emmett. He was already a full-blown alcoholic when he took the oath of office on March 4, 1913; Mayes knew that, too. He figured Emmett would spend a lot of his time soused, a little out of his mind, and he’d probably just do as he was told.

Mayes underestimated Emmett’s character, which makes me feel good (because I am not Team Frank), but it also points out the poignancy of someone trying to do what’s best, only to get tripped up by politics, and someone else’ plain old ambition. Emmett wanted to do a good job for his constituency. Mayes didn’t care; as long as his ambitions were satisfied.

Long story short: Emmett followed his heart/good sense with a postmaster appointment because it was the right thing to do, and it cost him his career.

Back to the breakup item: In April 1915, Emmett had already announced he wasn’t running for a third term. In the article about his decision to retire from Congress, he said that it was all his decision, but you can bet your sweet bippy (or the 1915 equivalent) that the Florida State Democratic Party forced it.