I’ve been reviewing the documents for Emmett’s will for several days, going over all of the names mentioned in the file. Almost all of them are familiar. After four years of doing this project, I thought I had a complete list of the folks Emmett was closest to in his life, and that I knew who they were.

And then, I found this letter. 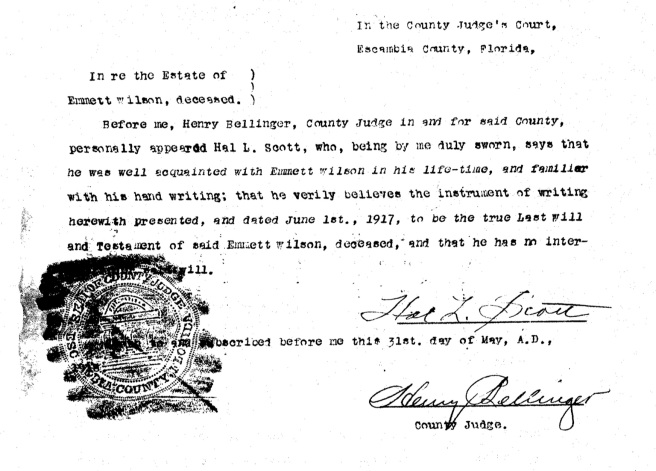 A portion of a document from Emmett’s will. Henry Bellinger was a professional colleague of Emmett’s (but not close). Hal Scott, though: A new mystery!

I dug around for several hours trying to find out more about this Hal Scott. I didn’t find much — he died soon after Emmett, in 1923 (causes unknown at this time), but I did find this:

He was born February 1884 in Montgomery, Alabama to Thomas Jefferson Scott and Mary Adelaide Taylor Williston, a solid, upper middle-class family. Hal’s family was very well connected with Theodore Roosevelt’s Republican party at the turn of the last century.

Hal was married in December 1908 to Alma McLeod in Florala, Alabama.

In 1910, he was an agent with the IRS in Montgomery; several articles in the Montgomery Advertiser indicate he was adept at busting stills. Hal remained with the IRS most of his career, serving as either an agent, collector, or receiver, in both Montgomery and Pensacola.

In 1911, he set up the Scott Investment Company in Montgomery with two siblings (Mary and John Taylor Scott).

Sometime between 1911 and 1912, Hal met Emmett. Emmett’s twin brother, Julian Wilson, lived in Montgomery at this time, and was an accountant with the L&N Railroad; it is quite likely that Hal knew Julian, and Julian may have introduced Emmett to Hal on one of Emmett’s frequent visits to Montgomery. Hal was still living in Montgomery at this time, but he had plans to move to Pensacola, because he wanted to go into business for himself. Regardless, this was also about the time Hal switched party affiliation from Republican to Democrat, and  he and Emmett built a solid friendship.

On March 4, 1914, Hal was listed in the San Carlos Hotel roster as visiting from Montgomery. This is when Emmett’s reelection campaign was in high-gear. Emmett knew Hal Scott was a go-getter and well connected, and planning a move to Pensacola. He asked Hal to work along with Chipley Jones, on his reelection campaign. Hal and Chipley were an effective team: Emmett received over 95 percent of the vote in the June primary, and was expected to run basically unopposed in the November general election. Several of Emmett’s campaign staffers expected to be rewarded for their diligence and loyalty, especially Chipley Jones, who had his eye on the big prize: The Pensacola postmastership, a sinecure with a hefty salary (about $75,000 in today’s dollars).

On July 5, 1914, two events rocked Emmett’s world — the death of his brother E. Meade Wilson, of rapid onset pulmonary tuberculosis, and the death of  A. Gibson Fell, the Postmaster of Pensacola.

Chipley Jones was ecstatic as a man without a chin could be while trying not to act too excited that his dream job just became available because a colleague died. The man could barely contain himself — he badgered Emmett on the long train ride from Pensacola back to Washington, D.C. the ENTIRE trip. (I kid you not; that is documented.)

Emmett gave Chipley reassurances that he was the man for the job, but Emmett had lost respect for him, after Chipley had pulled an underhanded trick on John Stokes (Emmett’s opponent in the primary) right before the election. Emmett had already decided he wasn’t going to appoint Chipley; instead, he let Chipley wonder about it for three months.

By early October, Chipley was impatient and snarly to everyone who asked him what was going on about the postmastership. Things came to a head on Sunday, October 4, 1914, when, according to reports, Chipley said something derogatory to Hal about Emmett, and Hal defended his friend. I wonder if Hal aimed for Chipley’s weak chin.

There’s a few other items about Hal that I gleaned from the archives:

On Nov 29, 1914 — Hal Scott and one of Emmett’s closest friends, Kirke Monroe, form the Scott Feed & Grain Company in Pensacola.

In 1916, according to the Pensacola City Directory, Hal was working an auto dealership; i.e., Pensacola Overland Automobiles, as the company’s manager.

Dec 28, 1916 — Hal named receiver for the F. A. & Gulf Railroad (a short railroad that extended from Crestview, Florida to primarily milling towns near the Alabama border, and specialized in moving lumber and naval stores.)

Hal Scott died on June 23, 1923 in Pensacola; his burial location is unknown.

Hal’s wife, Alma McLeod Scott, never remarried; they never had children. Alma died in 1981. Unfortunately, there is no one directly related to Hal and Alma Scott who I could ask about the relationship between Emmett and Hal. I doubt any correspondence from Emmett or Hal exists today — but you never know.