One hundred years ago today, almost exactly a year to his death, Emmett wrote his will. 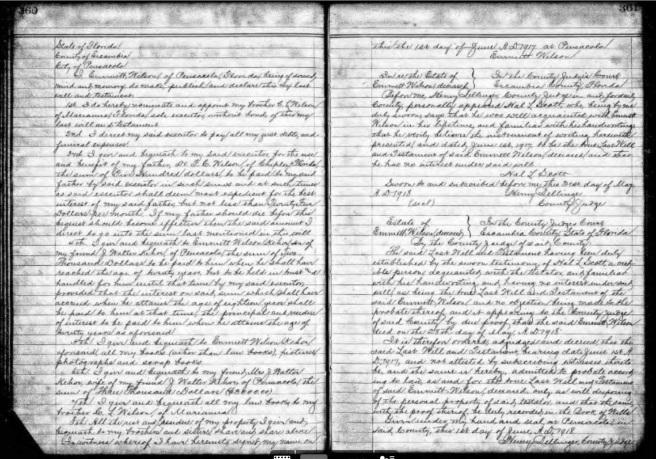 Emmett’s will, as it appears in the Florida probate documents. Filed June 1, 1918 by his brother, Cephas Love Wilson, executor. Source: Ancestry.com

I have a copy of Emmett’s original will; the document was typewritten by Emmett himself, on old Banking and Currency Committee stationery that he had saved from his tenure as a U.S. Congressman. Emmett edited and corrected the errors in the single-spaced document document himself, in pen.

Emmett’s original will wasn’t dictated to a secretary, nor was it signed by witnesses, nor was it notarized.

I believe he simply went into Walter’s office in downtown Pensacola (he wasn’t practicing anymore, but I’m sure Walter let him use the office, as they shared it once as partners), and borrowed a typewriter. I think it is particularly touching that he used his own paper — stationery from when he was at the top of his professional life — and wrote his will in solitude.

For a man who was, by now, dying of alcoholism, and likely in and out of clarity, Emmett appears to have thought out carefully how he wanted his few possessions dispersed. Emmett was solvent June 1, 1917 — the date he wrote the will — and he wanted to distribute his money and property (about $7,000) to Dr. F.C. Wilson, Jennie Kehoe, and Emmett Wilson Kehoe. According to the inflation calculator, $7,000 in Emmett’s time is about $133,400 today.

Unfortunately, by the day Emmett died, on May 29, 1918, he had run out of money and was borrowing against his life insurance policy to pay everyday bills — that’s according to a letter from Cephas, which was included in Emmett’s file in Pensacola. Somehow, Emmett went through all of his money (and then some) in a year.

It is amazing to me, during what must have been a terrible, emotional and psychological time for Emmett, that he got his affairs in order knowing for certain:

He wasn’t getting married.

He wasn’t going to have his own home.

There wasn’t going to be a new political career.

There wasn’t going to be a new law practice.

And, that the end was probably coming sooner rather than later.