On June 22, 1891, Emmett’s father, Dr. Francis C. Wilson, returned to Chipley, and his family, after a four-month separation. Dr. Wilson had been in Kentucky, attending medical school for one semester, to obtain a now-required medical credential so that he could continue to practice medicine in Florida.

The separation was a hardship for the family. The family was dependent on Dr. Wilson’s salary, and his absence meant money would be tight for awhile. Also, it meant Elizabeth would single-parent 10 children, manage Dr. Wilson’s medical practice (maintaining records, paying bills, providing nursing services when necessary, and so forth), and run the household. But Elizabeth was resilient and strong. She was not a stranger to difficult situations; I’m sure she told Dr. Wilson that she would manage just fine, everyone would pitch in, and not to worry. Things would be back to normal in only a few months.

And indeed, on June 23, 1891, things seemed back to normal for the family. That morning, Dr. Wilson immediately resumed his medical practice.  He hitched his horse to his buggy, packed his medical bag, and invited Elizabeth to come along with him as he made his rounds in Chipley. 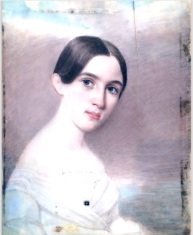 I imagine Dr. Wilson wanted to spend some quality time with Elizabeth, as they rode out together in the buggy along the dirt roads of Washington County, on that warm, sunny day in June.

We can imagine Elizabeth catching Dr. Wilson up on all the family activities and news. Theirs was definitely a love match — I imagine them talking about how much they missed each other. It is easy to imagine Dr. Wilson telling his beloved Elizabeth that would make it up to her for keeping everything together so well all by herself, especially now that he was home for good.

Midday, Dr. Wilson and Elizabeth rode into downtown Chipley, and stopped at a drugstore, to get a cool drink. One of the storekeepers brought the drink out to Elizabeth — she drank it — then collapsed, unconscious.

Dr. Wilson took Elizabeth immediately to the nearest house, where the neighbors put Elizabeth in bed right away.

It is not known what Elizabeth drank at the drugstore. Some family members believe she died of an aneurysm, but because an autopsy was not performed, the cause of death was not conclusive.