Here’s a summary of the July 4th celebration in Emmett’s hometown, as reported in the July 8, 1898 issue of The Chipley Banner. Dissecting this article provides an interesting snapshot of some of the people, places, and things in Emmett’s life. 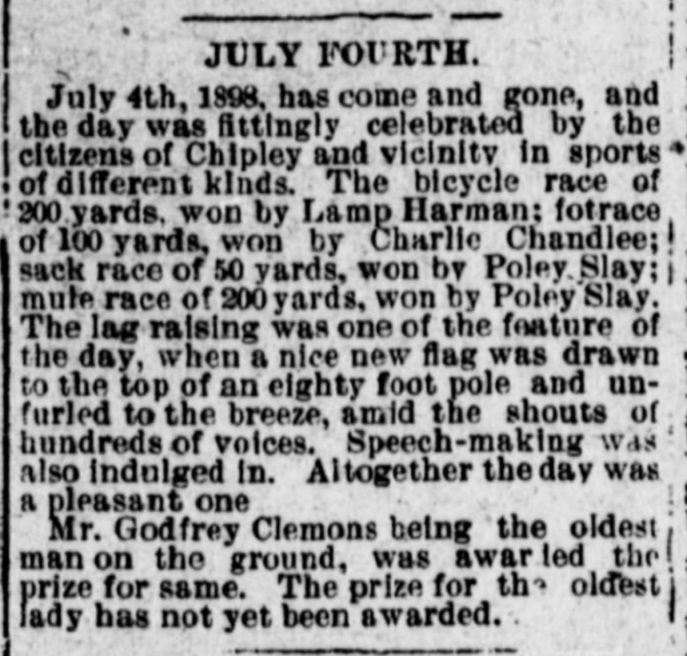 The local celebration centered around organized sports events, a patriotic flag-raising, and speeches (probably political), as it was a mid-term election year. Stephen Sparkman was running for reelection, and would handily defeat Republican candidate E.R. Gunby in the general election.

In 1898, the new flag that flew on the 80-foot pole had 45 stars; the President of the United States was William McKinley; the Spanish-American War was in its third month; and 15-year-old Emmett was a telegrapher at the Chipley train station.

The Spanish-American war lasted only four months (it was fought between May and August 1898). Emmett could have volunteered, perhaps even lied about his age to join the military, but perhaps he was disinclined after hearing the stories of hardships and realities of war (i.e., it wasn’t so glamorous or exciting) from his father and grandfather’s experiences during the Civil War.

Lamp Harman was Miles Lampkin Harmon (1871-1934), first policeman of Panama City, Florida. I wonder if Emmett or any of his brothers participated in the race too.

The fleet Charlie Chandlee (1874-1973) eventually became a well known real estate and insurance salesman in Panama City. His obituary (Panama City News-Herald, January 15, 1973) stated that his family moved to Chipley for the health of his mother, finished high school there, then attended school in DeFuniak, settling in Panama City in 1905.

Poley Slay is also known as Napoleon Bonaparte “Poley” Slay (1871-1956), and was a longtime resident of Chipley.

Unfortunately, I haven’t uncovered much about Godfrey Clemons is a mystery still, although I found that Clemons received payments from Washington County in 1898, and is listed as a pauper.