One of Emmett’s friends when he lived in Pensacola during the height of his suave-and-sophisticated club-man existence was Alba Houghton Warren (1874-1950).

Warren was from an upper middle-class family in Worcester, Massachusetts, was, according to The Pensacola Journal, one of the city’s “leading young (men) of affairs;” affairs meaning ‘business interests’ back in the day.

Emmett and Warren were friends; they socialized together, they both liked baseball, they enjoyed boating parties on the Gulf of Mexico.

And, although both Emmett and Warren were considered ‘leading young men of affairs’ in Pensacola, Emmett’s ‘affairs’ were less business-like, and more social; i.e., frequent attendance at the Osceola Club, frequent attendance at soirees given by the upper crust of Pensacola’s society, whereas Warren (who was also a member of the Osceola Club, and attended society events), was deemed more serious, more moderate.

Certainly more sober than Emmett. But I digress.

Warren was an alumni of Worcester Polytechnic Institute (1895), where he earned a degree in mechanical engineering. He was a member of the Phi Gamma Delta fraternity, and the Baseball Association.

Warren is now the manager of the electric company in Pensacola. 1910 U.S. Census. Source: Ancestry.com

According to the U.S. Census, lived at 1101 Barcelona Street, and was listed as the head of the house — a boarding house — perhaps he owned the house at the time as well, because his primary job was manager of the Pensacola Electric Company. Notice in the census image that several of his boarders worked with him and/or were affiliated with the Pensacola Electric Company (specifically Superintendent Reynolds Harding), and W. Dennon Smith, the Assistant Superintendent.  Interestingly, Harding and Smith were also natives of Massachusetts.  Out of the six men who boarded at Warren’s house, four were from Massachusetts. 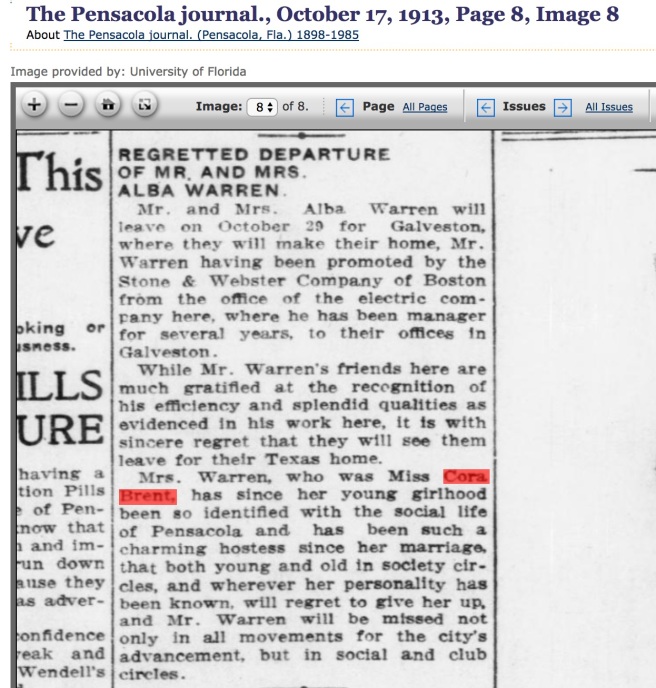 Warren’s obituary from The Pensacola Journal (March 28, 1950) stated that he was superintendent of the utility, and served in a similar capacity for electric companies in Texas, Louisiana, and Georgia. Perhaps it was because of better job opportunities (hence the change from the loom works to the electric company between the years 1900 and 1910). The city directories between the years 1900 and 1910 (that I was able to find that mention Warren) don’t have much to say about his career development, except that he ‘removed’ several times:

At least we know where Warren was in 1909! Pensacola City Directory for 1909. Source: Ancestry.com

In the next post, I’ll feature more about Alba Warren and his wife, Cora Emily Brent. Emmett was a guest at their wedding — and don’t worry — Emmett didn’t do anything like upset the cake or embarrass himself in front of the guests.