Friends, I’m happy to report that I’ve hit a treasure-trove of new information on Cephas Love Wilson, Jr., oldest son of Cephas Love Wilson Sr., Emmett’s closest sibling, law partner, and executor of his estate. I’m thrilled with the amount of information I’ve turned up; not only does it shed light on Emmett’s nephew, but interestingly, it informs the personality of Emmett’s brother. That’s important, because Cephas Sr. was a surrogate father to Emmett, at least until Emmett graduated from law school in 1904.

First, I’d like to share a very interesting article that I unearthed unexpected the other day — when I was looking for something else, naturally!

Lula was likely scared out of her wits. Cephas Love Wilson, Jr., the baby, was less than a month old. Source: The Chipley Banner, August 25, 1894.

Can you imagine what that must have been like?

Here’s Lula, with a one-month old baby, probably just out for her first drive since she had Cephas Jr. A brand-new mother out with her brand-new baby, probably making calls on friends in Chipley that Saturday afternoon. In fact, Lula, the baby, and Cephas Sr. were on their way to St. Andrews for a week’s vacation. They decided to stop in Chipley for a few days to visit with family, to show off their son. 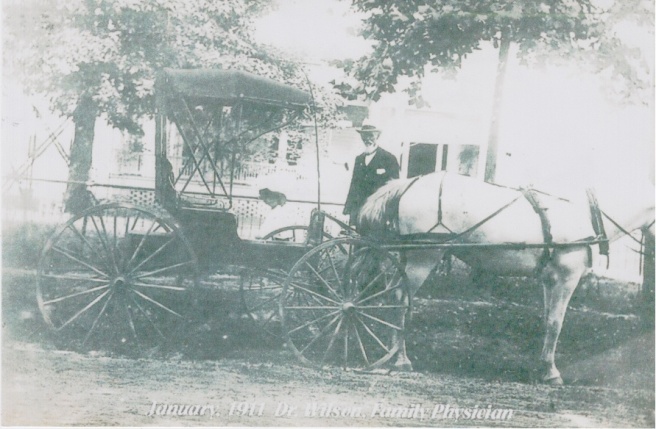 This was Dr. Wilson’s buggy. Here, Dr. Wilson is posed in front of the Butler house in Chipley, likely on a house call. This is also probably the same buggy that Lula drove when the horse was spooked. Background on this photo: It was a copy given to me by a direct descendant of the Butler family in Chipley; I am not certain who has the original, but there are contemporary prints (large, matted) in existence. I obtained one from a contact in Pensacola, Lucy Gray; I gave that matted print to Emmett’s 99-year-old niece.

Lula probably put Baby Cephas in a basket, right there in the front, on the floorboard of the buggy. And suddenly — the horse takes off!

The streets of Chipley were not paved in 1894, but they were dirt roads, probably uneven, possibly rutted, especially if she was on or about Main Street, where large wagons and cattle passed through. The short article doesn’t give much attention to the fact that this was a truly dangerous situation, especially with a horse racing through a busy town, over an uneven, hard road. It says, ‘no one hurt,’ but Lula and the baby could have easily been killed.

And I can imagine what this might have been like for Lula: She was probably panicking, her heart racing, calling for help as the horse literally tore down the road. I can also imagine Lula anxiously pulling back on the reins, desperate to slow the horse, while frantically trying to keep the basket steady with her feet. “Dear God,” she must have prayed out loud, “please keep us safe!

We don’t know if Lula was able to stop the buggy herself, or if some of the townsmen chased and eventually overtook the buggy, escorting them back to the Wilson’s house on 6th Street. It seems most likely that a Good Samaritan helped her, though; she would have been frightened out of her wits, maybe unsteady, and appreciative for assistance in case the horse was spooked again on the way home. It also seems likely that the Good Samaritan told the tale among the neighbors once all was back to normal, and word got back around to the editor of The Chipley Banner.

And, in later days and weeks, as she held Cephas Jr. close to her, perhaps rocking him to sleep at the end of the day, Lula would probably reflect back to this moment.

Before I found this article, I have long believed that Lula and Cephas Jr. always had a close relationship; i.e., Cephas Jr. wasn’t a ‘Mama’s boy,’ but he and his mother they shared many interests, and had a good rapport. (Interestingly, I don’t this was the case between Lula and Kathleen Wilson, Cephas Jr.’s younger sister.) Now that I’ve seen this, I wonder if this near-miss helped foster the protective, close relationship Lula always seemed have with Cephas Jr.

I’d love to hear from any of Cephas Jr.’s descendants about this.

I’ll continue my report on the new information about Cephas Love Wilson Jr. over the next few days.