While conducting a periodic check-back on old databases, I found an updated obituary for Emmett’s oldest sibling, Augustus Maxwell Wilson, who was called “Max.” 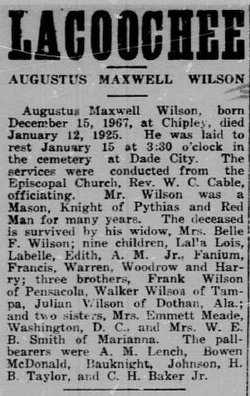 The text from another obituary (from the Palatka, Florida Times-Herald for January 30, 1925) stated he had lived (past tense) in East Palatka, Florida, but at the time of his death had been living with his oldest son, A. Max Jr. in Lacoochee, Florida.

This obituary also confirms that Max was living separately from his wife Belle at this point. In another post, I’d mentioned that Belle wrote a family history, “Remember Who You Are Kin To,” published by her son

2 thoughts on “Update: A. Max Wilson”