It’s the Wilson family members I don’t have much information about that intrigue me the most. Over the past few days, I’ve been filling in the blanks of background information for Emmett’s second oldest brother, Percy Brockenbrough Wilson. (I’ve written about him before; you can check back here and here.)

From family genealogy and other background information, we know:

Some of the items I found going back through different databases were items added since my last check-in; they basically are second- and third-confirmation sources for the research. For instance:

A confirmation of Percy’s graduation from the Medical College of Alabama in Mobile, 1895. The school closed in the 1920s, and records were transferred to the University of Alabama in Tuscaloosa. Source: Louisiana State Medical Society Bulletin, 1895, via Google Books

There’s nothing located yet in the University of Alabama-Tuscaloosa archives about Percy or his class at the MCA-Mobile, but I found an image of the school at a great blog on Alabama history: 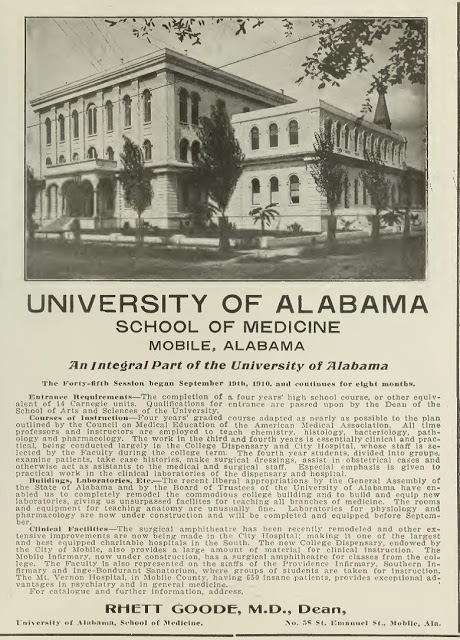 And, an 1899 photo of surgical instruction from MCA-Mobile from the University of Alabama-Tuscaloosa archives:

Medical students in a surgical training class, 1899. Even though this is dated five years after Percy was a student, medical history colleagues tell me this was what Percy’s class would have resembled four years earlier. Source: The University of Alabama Archives, Tuscaloosa

This was not inexpensive for Percy or his family. Tuition for MCA-Mobile was modeled similarly to a sister institution, the Birmingham (Alabama) Medical College. According to their 1895 school catalog, tuition costs were as follows:

Finally, I came across an obituary for one of Percy’s sons, Robert Wilson, dated 2005:

I wonder if Robert looked like Percy. I’d love to find a photograph or any other information about Dr. Percy Brockenbrough Wilson to include in Emmett’s biography.