This was an interesting find the other day. 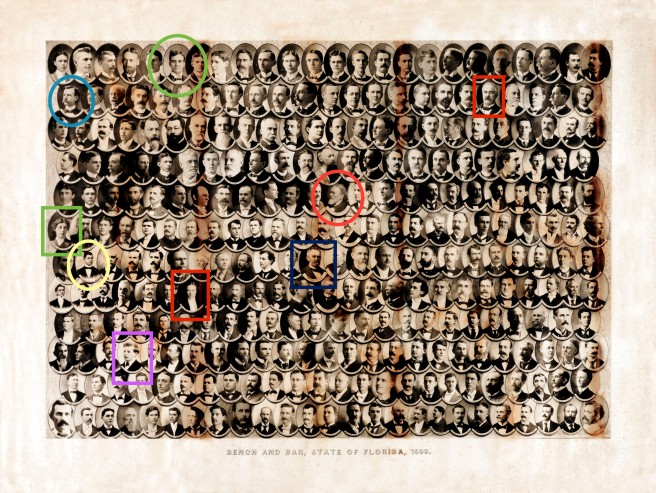 The Florida Bench and Bar, 1899, with annotations. Source: Florida Memory.com

Yes, this is the veritable “Who’s Who” of Florida’s legal and political leadership as of 1899. If you were ANYBODY of importance, your mug was here, in this eye-test of a montage.

I went through every single doggone one of these images. There’s a list on Florida Memory.com of who is on this page, but that list is not in any order whatsoever. So, I spent an hour or so identifying several key players in this photo that figure significantly into Emmett’s story.

Here’s who was considered hot stuff of Florida Bar and Bench back in 1899:

Nathan P. Bryan, a man without a comb.

Nathan P. Bryan — in the green circle at the top of the photo. Bryan served as a U.S. Senator at the same time Emmett was serving as U.S. Congressman. Bryan knew Emmett fairly well; in fact, he ‘loaned’ Emmett his personal secretary as an escort home to Marianna in 1915, after Emmett nearly died at Providence Hospital in 1914.

And yes, that is a cowlick on the left side of his head in the photo.

Charles Parkhill — in the second row, blue circle. Parkhill was the initial candidate for the third district congressional seat in 1912 (Frank Mayes’ first choice). He had gone ahead and resigned his post as judge of the circuit, and purchased an automobile so that he could travel the district, impress the constituents.

The thing was, Parkhill really wanted to wear the congressional toga, but he was torn: He had a large family, the salary of a judge didn’t pay much, and his wife wanted to move back to Tampa. Three weeks after announcing his candidacy, Parkhill changed his mind — he put his family first, pulled out of the race. Frank Mayes then approached his second choice, Emmett Wilson …and the rest is history.

John H. Norton — in the second row, red box. A lawyer out of Jacksonville. I’m not sure who this man is; but, I liked the looks of him. He reminded me of Sherlock Holmes’ Dr. Watson.

Augustus Emmett Maxwell — in the fifth row, red circle. Emmett’s grandfather, once a jurist on the Florida Supreme Court. Emmett and his grandfather were close; I believe Emmett wished to emulate his grandfather as much as possible. Maxwell was Emmett’s mentor up until his death, in 1904, right before Emmett graduated from law school at Stetson University. Maxwell died in Chipley, at the Wilson family home, in the care of Emmett’s father, Dr. F.C. Wilson.

Lou Ella Pinnell — in the sixth row, green box. Meet the very first woman to pass the bar, and be admitted to practice law in Florida. The gentleman right next to her with the gigantic beard is her father (and law partner), Ethan A. Pinnell. It is doubtful that Emmett ever interacted with her, but I have to include her in this discussion because of who she is.

The Pinnells, of Bronson, Florida, were originally from Missouri. Ethan encouraged his daughter to study law with him when she expressed interest at an early age. She proved herself, in her father’s eyes, and so she took the bar examination, which, at the time, was an oral examination given by Levy County, Florida attorneys. According to Lou (and witnesses), the examiners were twice as hard on her with the questions, because they thought it unfit that a woman would want to become a lawyer. She answered their questions correctly; so, the board could not deny her admission to the bar — but, the Supreme Court of Florida did — because the justices at that time did not know what to ‘do’ with her.

Finally, five months after passing the bar, the Supreme Court of Florida admitted her, and she went into practice with her father.

In case it hasn’t been said in many decades, thank you, Lou Ella.

J. Walter Kehoe — in the seventh row, yellow circle. Kehoe was Emmett’s ‘best friend’ for years; Emmett lived with the Kehoes most of his adult life as an extended member of that family.

The yellow circle around Kehoe isn’t careless, by the way. More to that story in the book.

Unfortunately, I have not been able to find anything out about her, other than a minor writeup about her in a publication called Florida Agriculturist. Here’s what it said:

I wonder if Alice knew Minnie Kehoe? I imagine Alice, Lou Ella, and Minnie probably did get together to compare notes, and so forth. I would love to have at least witnessed one of their gatherings!

Charles Swayne — in the seventh row, dark blue box. Once upon a time, Judge Charles Swayne was up for impeachment — and his own counsel admitted that he was guilty of some of the charges lodged against him, but said that the charges against Swayne ‘inadvertent.’

Emmett’s brother Cephas was called to testify in this case, which you can read about here. Swayne was guilty, but he got off. Plus ça change, plus c’est la même chose.

A youthful CHB Floyd. Unfortunately, he died at the end of the influenza pandemic, in Florida, about 1920.

Charles Henry Bourke Floyd — in the 10th row, purple box. CHB Floyd was not only an attorney, but he was a well-read, prolific writer who was popular for bestowing his ‘sprig of laurel’ to various individuals he admired and featured in his syndicated editorials.

Floyd even bestowed upon Emmett this hallowed sprig after winning the nomination for his congressional seat in June, 1912.  Floyd and Emmett knew each other as acquaintances, not close friends.

What I thought interesting about the montage was that Emmett’s big brother, Cephas Love Wilson, who considered himself very hot stuff (at the bar, at the bank, at the bench, and in the, ahem, bedroom) is not included in this photograph.

There are several other Wilsons, but not Ceph.

In 1899, Emmett was still at West Florida Seminary, and so, would not have been included in this montage.

It is not clear who or what determined that these individuals were representative of Florida’s best of the bar and bench. It is an interesting collection of personalities, ages, level of experience, and the like. There doesn’t seem to be another one like this; I have not yet found out if this was an annual project. There are other photo collections of state representatives, but nothing similar in scope to this.