The big question I’m exploring with one of J. Walter Kehoe’s descendants is this:

Was he once Catholic or wasn’t he?

A few days ago, I found Walter’s obituary, which mentions a Presbyterian funeral. I reached out to his grandson and asked about it. Walter’s grandson replied that he wasn’t aware of any Catholics in the family, which was a surprise — I’ve always thought Walter was Catholic, because Walter’s father John Kehoe was Catholic. 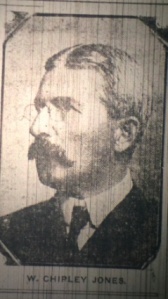 This is an important detail in telling Emmett’s story — and in case you’re wondering why I’m focused on this, it’s because of something Emmett — or, rather, Emmett’s jackass campaign manager — did during the 1914 reelection.

In 1914, Emmett was being primaried by John P. Stokes, lawyer, statesman and Roman Catholic. This was a political handicap in Florida — 22nd governor, Sidney Catts, who ran on the Prohibition ticket and won in 1922, largely campaigned as an anti-Catholic. 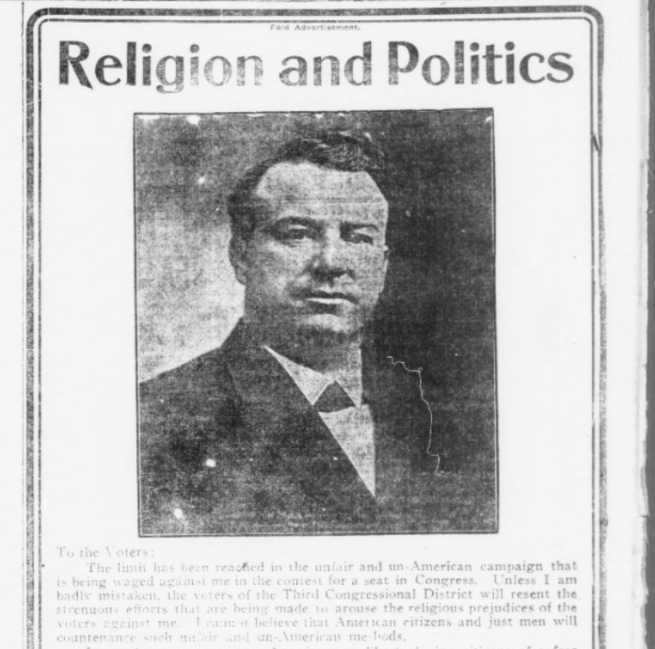 Stokes and his wife were married by a Catholic priest. That was the problem. Source: The Pensacola Journal, in ChroniclingAmerica.gov

Here’s Emmett’s response to Stoke’s charges in the next day’s paper: 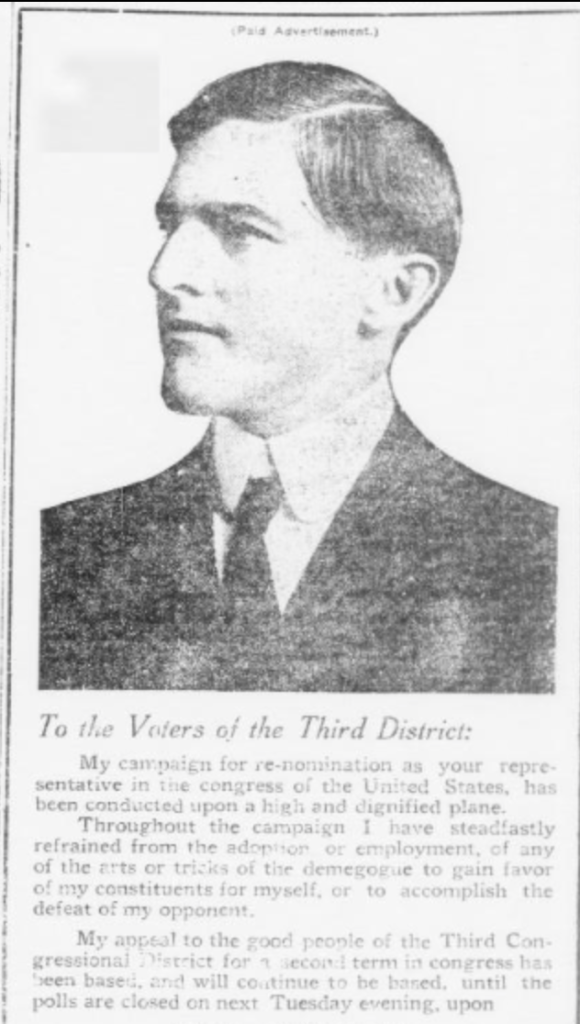 Emmett doesn’t say so directly, but his ad states *he* didn’t do anything wrong. This was written by Chipley Jones, by the way. Source: The Pensacola Journal, via ChroniclingAmerica.gov

Emmett was probably telling the truth — he, himself, didn’t actually do anything — but you can bet someone in his campaign (*cough* Jones *cough*) did. The damning thing about the whole situation is that Stokes wasn’t favored to win. Stokes wasn’t even close! Emmett was hugely popular at this point, and his ineptness in office, and alcoholism, were not visible to the general public.

Emmett may not have actually been the one to ‘ok’ this campaign tactic, but the fact it happened indicates Emmett was hands-off with the management of his campaign. That’s not good; essentially, Emmett gave tacit agreement to do whatever it took to win, even when the nearest competitor wasn’t close; saying his campaign was run on a ‘high and dignified plane’ rings hollow.

Meanwhile, I think the issue of Walter Kehoe’s Catholicism is important, because the Kehoes considered Emmett family. Emmett lived with the Kehoes for several years; he was much loved, and trusted.  The idea that Emmett’s campaign went after Stokes because he was Catholic might not have sat well with the Kehoes. I wonder what Walter said to Emmett about all of this when it finally played out, if he said anything at all.

Maybe, by this point, Walter had joined the Presbyterian Church.

In the end, Stokes conceded gracefully.

Stokes would go on to have a long, successful career in law and Florida politics. He was well respected; well remembered.

And we know what happened to Emmett.