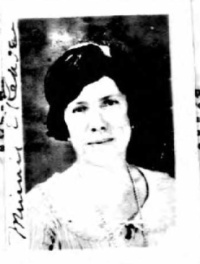 Readers, I must admit, I have great admiration for one of the femtors (female mentors) in Emmett Wilson’s life: Minnie Eloise Kehoe.

I’ve mentioned her before in an earlier post. When I think about Minnie, I’m struck and awed by what she was able to achieve during her lifetime — not that I would ever have doubted her abilities or intelligence, mind you. She was all that, and then some.

She got her start working at her brother’s law firm, and then served as a state court reporter for many years. She also opened her own shorthand and reporting school in Pensacola — and if that wasn’t enough, sat for the bar exam in 1912 and passed, becoming the first woman attorney in Pensacola. All of this, “while still retaining her femininity,” according to an article in The Pensacola Journal). Seriously. I wonder if some folks actually thought Minnie might get broad shouldered, grow chest hair and her voice would drop a few octaves because she took the bar exam.

The fact she was the only woman taking the exam actually made this a Page One ‘special.’ Source: The Pensacola Journal, 1912.

The thing about Minnie, according to my sources, is that she lived her life with the view that what other people thought of her was none of her business. Minnie did what she wanted to do because she liked and understood the law, she was experienced and good with the law, and it was her calling. Period. It didn’t matter (in her view) that she happened to be a woman.

Minnie also knew that people would be watching her closely, once she made it to the Florida Bar. You know that must have been hard on her; her closest role model and mentor was probably her brother Walter, and for all his qualities, Walter likely could not empathize with some of the struggles his sister encountered on her way up the legal ladder.

As such, she probably also felt that in carving out her niche this way, she didn’t really completely fit in anywhere. Not that I think she didn’t have support from friends and family — she did — but she was the only woman lawyer in Pensacola for years. She was the sole member of her club. She still would not be allowed into the clubs where other male lawyers would gather, smoke cigars, perhaps sip a glass of brandy or coffee, to discuss cases, make deals, and so forth. She would be on the outside looking in on that for a long time. I wonder if this bothered her? If it did, she’d never let on, at least publicly.

Minnie was all that. Source: The Pensacola Journal, 1912.

Minnie may have started out as the Della Street in the Pensacola legal world, but she was really more Perry Mason than Della. I could never see Della empaneling a jury; but Minnie did. In fact, when Minnie empaneled her first jury and won the case, it merited coverage in The Pensacola Journal! The patronizing tone of the article is just cringe-worthy, but the locals at the time had to admit, with that article, Minnie had ‘made it.’

So, this amazing woman attorney, Minnie Kehoe — in reflecting on her, it struck me that she must have had some kind of mentoring — femtoring — effect on Emmett Wilson.

Minnie was in the same law offices with Emmett and her brother Walter, all working together, for years. Obviously, Minnie was not just relegated to pouring coffee and taking dictation for the lawyers in that office. She was contributing to cases. She was voicing her opinion — and a well informed opinion, at that — every day, engaging in animated, heated discussions with Emmett and Walter on their client’s cases.

Minnie had at least 10 years’ experience, plus the official court reporter legislation under her belt  when Emmett showed up, freshly graduated from Stetson, bar admission in hand, ready to practice law. Obviously, Minnie was able to teach him a thing or three. I don’t believe Emmett was ever patronizing towards Minnie, but you can bet your life that if it happened, it happened only once.

The Kehoe family made a strong impression on Emmett. Eighteen months after Emmett had graduated and started working in his brother’s law firm in Marianna, he followed the Kehoes to Pensacola to establish his own law practice. (Minnie, Walter and Walter’s family had moved to Pensacola to set up a law practice.) The first thing Emmett did upon arrival was board with the Kehoe family — Minnie, Fannie and their father, John Kehoe, on West Cervantes Street, and Emmett took Walter’s advice as he learned Pensacola’s local and political ropes. The Kehoes were family to Emmett; and Minnie regarded Emmett as a beloved younger brother.

The relationship Emmett had with the Kehoes was important in shaping his career, but I believe it went much deeper than that for Emmett. That’s why I’m I’ve been on a big quest for the past two weeks to find Minnie or Walter’s papers. I’m checking with historical societies and archives to see if they were donated. I would think that Minnie’s papers, at least, would be held in some law school or university archive. Minnie’s papers certainly have historic value, in my view.

For the record, if anyone out there knows of Emmett Wilson or Minnie Kehoe’s papers, journals, writings, or other documents that may exist out there, somewhere, contact me. Meanwhile, I’ve been working with a lot of great new contacts this past week. I’ll let you know if something turns up.