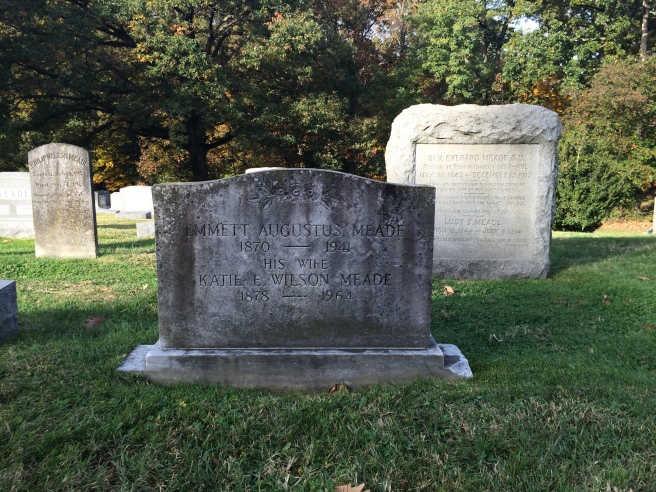 Lucy Maxwell Meade (who is buried just to the right of this grave) was Emmett Meade’s mother. Lucy was the sister of Elizabeth Maxwell Wilson, Emmett Wilson’s mother.

I suppose you could do that back then without a lot of problems. Today, the law varies: First cousins can still marry in 19 states and the District of Columbia; six states limit it to ‘certain circumstances,’ and 25 states forbid it outright.

Katie is a important person in Emmett Wilson’s story, because she was, according to my research, very close to him his whole life.

While I think Cephas and Emmett had a close sibling relationship, Emmett’s relationship with Katie was special, because she acted as a kind-of surrogate mother to him, almost right from the time their mother died in 1891. Cephas loved his younger brother, but Cephas loved power and prestige more, and he didn’t let whatever feelings he had for Emmett stand in the way of using him as a stepping stone towards the Florida governor’s mansion.

Katie was not that kind of sibling.

I have several examples illustrating the importance of Katie in Emmett’s life, but two really stand out: She helped take care of Emmett for about two months after he had almost died from uremic poisoning in 1914; and again, when he health was on a downward spiral in late spring of 1918.

Basically, each time, Katie dropped everything, packed up her child, and left her home to take care of her younger brother more than once in his life. There were eight other siblings in this family, and yet, it was Katie who was always there in this way for Emmett.

Francis Emmett Meade, age 10 months (left) and Emmett Augustus Meade, age 10 days (right). Note the odd third footstone on the bottom right of the photo. It has the letters “J.M.F.K.” on it. I haven’t been able to find out what that means yet.

Katie and Emmett Meade had a good marriage; sadly, they had two boys who died almost a year apart from each other. One lived only 10 days; the other, 10 months. I can only imagine what that was like for Katie. I’m no psychiatrist (and, of course, this is conjecture), but I can see how Katie would have dropped everything to take care of her little brother when his health failing. Emmett Wilson had no one (i.e. spouse or equivalent) in his life; it seems like Emmett Wilson was, basically, Katie Wilson Meade’s surrogate first child.

I had a hard time tracking down the descendants of Katie and Emmett Meade, because they only had one child; and then, that child only had one child. Luckily, I’ve found and contacted that descendant. I hope that descendant responds, and is at least willing to exchange information. I’m curious to see if any letters, journals, or other family papers exist that may shed more light on Katie and Emmett’s relationship.

Pohick Church is a historic church and cemetery outside of Alexandria, Virginia. Katie’s husband, and father-in-law, Everard Meade were both rectors for this parish. If you ever are in Alexandria, it is worth a visit.